While Mark was out of town for work complaining that the meeting finished earlier than expected so he was “stuck in Paris for a few hours” (how can you be stuck in Paris???) the rest of us filled the day with all sorts of activities to try and challenge this stray November day that we can still have fun despite the dreary weather.

This morning we went to a playgroup held in a lovely cafe in the old town. Last time I attended a playgroup meeting was when Una was a few months old. I ran for the hills. I decided to give this one a try at the suggestion of a friend, spent just over an hour catching up with her and left when it got too busy and Nestor started getting overwhelmed. Most of the kids were younger than 2 so I don’t know if we’ll be going back but at least there was no running this time.

After that I kept my promise and we went to McDonalds. Now, this is SO big in Una’s world that she only talked about that for two days. She’s only been twice so far, once with our nanny as a farewell event and once with her school friend and his mum. She still talks about that more than any.other.outting she has ever experienced. Even Efteling wore off quicker. So I figured that it’d be better if we take her every now and then rather than when she turns 13 she decides that’s all she would eat, informed their father who looked at me as though I’d just told him that I would be taking them sky diving with no parachutes and off we went. Two Happy Meals on our tray, the two of them polish the snack tomatoes, attack the chips bags and then I give them each their cheeseburgers. Una takes a breadcrumb sized bite and politely informs me that she won’t be having any more of it. Nestor, being the carnivore he is, bites enthusiastically only to make his “I am eating mashed potatoes?” face, immediately followed by a very loud “Vis!” (yuck in Dutch). We leave to avoid getting thrown out. Una is thrilled and so thankful for a lovely outting.

The rest of the day we spent painting ourselves: faces, nails, hair, you name it. It was one of those days when nothing extraordinary happens but everything just runs smoothly. The kids are mellow and loving with each other, wearing green socks instead of blue is not toddler unhappiness in its purest form, the mother is calm and patient, even parking is plentiful. An extraordinary day indeed. 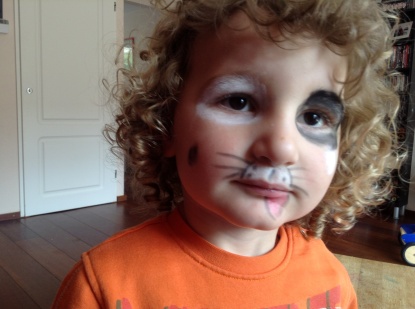 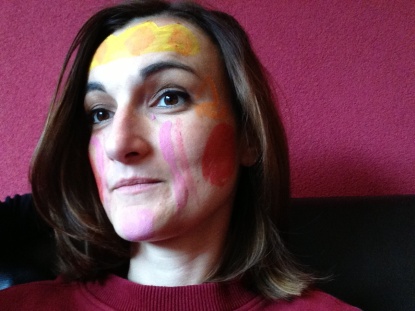 Filed under Cherished moments, Life in Delft, Out of the mouths of babes